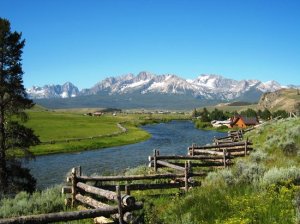 Robert Ernest Kimberling was born July 19, 1925, at his parent’s home ranch, six miles east of Prairie City, Oregon.  His parents were Ernest Wilbur Kimberling and Clara Inez Kimberling. He had two brothers and two sisters.  All have proceeded him in death including his wife Donna and his eldest son Jim.

He attended school from grades 1 - 8 at the nearby Riverside School in which all students were taught in the same classroom by one teacher. After that, and until he was old enough to get his driver's license, he caught rides to and from school, to Prairie City High School six miles away, from older high school students living nearby.

When World War II began for the United States, December 7, 1941, Robert Ernest Kimberling was a 16 year old high school sophomore.  When not in school he was living and working on his father's ranch some 6 miles East of Prairie City, Oregon.

During part of the year after he finished high school (as senior class valedictorian),  he served as secretary to his father at the Oregon State Legislature.  The next year he enlisted in the Navy on September 20, 1944, at age 19.  He had previously chosen an agriculture deferment from serving in the military for one year.  But like some of his friends had done, he chose to enlist in the war effort.

And not training as any ordinary radio operator, but as a forward control radio operator who, as part of a small team, went into enemy territory ahead of ground troops to spy on enemy positions and coordinate air strikes and naval bombardment.  His was trained for a high risk - high reward job:  high risk because he would be high on the enemy's elimination list; high reward because of potential American lives saved when he did his job.

In 1945, he was on a military troop ship that was headed for Japan from Hawaii as part of the invasion fleet when he first heard news that the war was over.  He never made it into combat, but he was fully trained and committed.  He received an honorable discharge from the Navy on July 5, 1946, in Bremerton, Washington.  He went back to working on his father's ranch, soon to turn age 22 on July 19, 1946.

While attending Oregon State University in 1948, he met Donna Lee Fleming, then a resident of Monument, Ore.  They were married in September of 1948 in John Day, Ore.  They had two sons, Jim and Kim. Until Donna passed away January 31, 2013, they were married for 64 years.

He lived at the home ranch site until 1980 when he and his wife, Donna, sold the main ranch and

moved across the river some 4 miles to the present home site, 29713 North River Road.  During the earlier years at the new location, he was involved in excavation work as well as logging of his private timber.

Besides managing the ranch and current home site, over the years he found time to serve in various and sometimes consecutive capacities as a basketball referee for several years in and around Grant County during the early 1960's; Prairie City schools board member for several years in the 1960's;

He is survived by one son, Kim Kimberling of Prairie City, a daughter-in-law, Laurie

By his direction, he will have a cremation burial at the Prairie City Cemetery, with a Navy Honor

Guard from the American Legion presiding at the burial.  After the Honor Guard has finished

(21 gun salute, presentation of the flag, and the playing of taps), the interment is complete.  No service will be given.  His interment is open to the public.  The date and time of his interment will be published in advance in the Blue Mountain Eagle newspaper.

Donations can be made to Driskill Memorial Chapel in the name of Robert Kimberling for the good of American Legion, Post # 106, Prairie City, Oregon.

To plant a tree in memory of Robert Ernest Kimberling, please visit our tribute store.